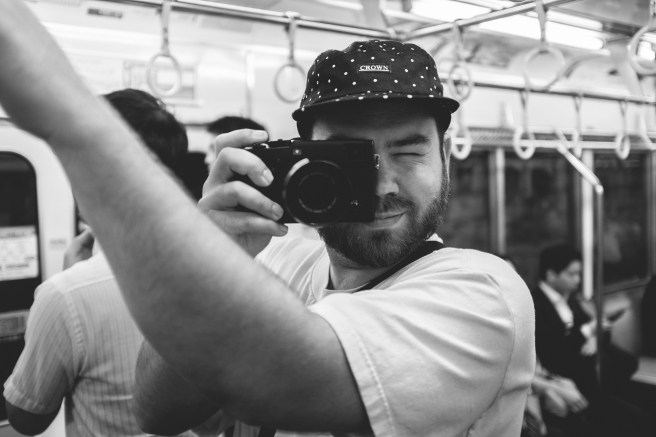 For two years we (My girlfriend, Childhood friend Gabriel, his girlfriend and me) were supposed to go on a trip to Portugal. Gabriel works for Air Canada so we fly standby for really (I mean really really) cheap.
But flying stand by has it’s downside, you have to get on a flight that has empty seats and it could be challenging at time.
So a week before the leaving date, we look at the flights for Portugal.
All open to go but very tight for the return date. Gabriel and his girlfriend we working on the 22nd, 23rd so we had to come back to Montreal for that date.
We looked for other destination, Madrid was open, Berlin was trickier but was an option.
Then Gabriel said: ”Why don’t we go to Japan?”
For me the 13 hrs flight was a big turn off and in my head it would give us about 5 days so I was like… ”No”. So Madrid and Berlin was the choices and we were getting close to the departure date. We changed our money to euros.

Gabriel then came to my place the same day so we could look up everything and finalize our choice. We looked again at Tokyo and how many days we would get flying there.
We realized it would give us 7 days… That’s when my mind changed.
I was all hyped and it would only cost us 30$ more that Europe. So we settle for Tokyo. right after changing our money to euros!
I got to admit after Gabriel left I was thinking about the 13 hrs flight going and back and I was stressing. I love flying but being trapped for 13 hrs straight was bugging me.

The next day (Two days before departure) I had to do a round trip to Quebec city. I was thinking about the flight and realized I had a wedding to edit, that would keep me occupied for a few hours. Then on the way back I would edit my shots from the trip, I was hyped up and ready so I messaged Gabriel: ”Japan?”. he responded with:

Then the same night we face time to finalize everything and he tells me he has a pass he will use that makes us pay what he pays and if there is seats we are automatically upgraded to first class… IT IS ON!

We got to Japan and it was so humid, hot and raining. We knew it was going to rain but we didn’t really care since it ain’t a ”sunny, beach” destination but let me tell you it was HEAVY especially after a 13 hrs flight but we were in Japan!
We took the subway from Haneda to Asakusa and our first cultural shock kicked in when the subway stopped at the first station… Complete silence… you could hear a fly passing by.

For the first night we stayed in Asakusa where our hostel was located. Walking around in the unnamed streets. An other shock hit us: The streets are so clean you could lick them. 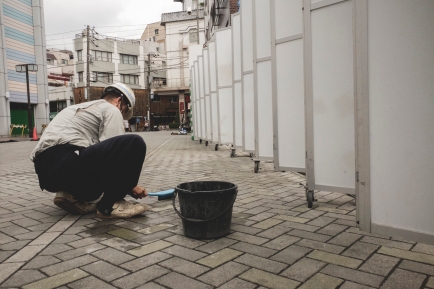 Now this trip wasn’t a ”photography trip”, we were going on vacation to enjoy and visit not to take photos but I had to. So I was just snapping shots as we walked around trying to balance vacation/photos. I brought the X-Pro2 as my main camera and the X70 as a backup. After the first day I couldn’t stand my bag anymore so I went and bought a fanny pack to bring the X70 only with me. I ended up using the X70 for 90% of the trip. 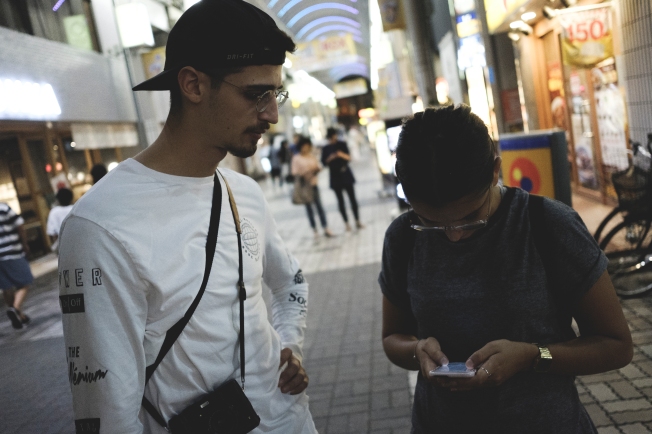 Breakfest in Japan is different I guess… on the menu there was rice, beef and pork.
We also saw a meal that was kind of close to what we are used to with a sausage and egg but still rice and soup. I was fine with it. I love rice! 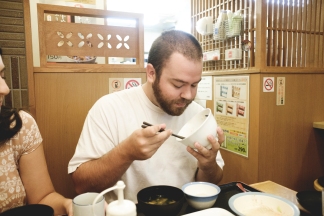 Finding your way around Tokyo is a real challenge. Gabriel and Lilla had they data plan so we thought we would use google map to find our way around but it seems that our data plan somehow didn’t like Japan because it kept turning around and it was a pain to use. We had to try to find by ourselves or ask.
Which brings me to an other shock: Japanese people are extremely nice.
We were looking for a Uniqlo (my new favorite store, we went to about 5 different ones in japan and brought unique stuff back :D) and the GPS wouldn’t get us there.
Annie then asked a random guy on the street, business dude going on the opposite direction. He tried to explain but his English wasn’t exactly on point plus the streets are so random it would’ve been hard even if he spoke perfect English. So he says ”Ok, follow me”. He then brought us about 5 blocks away to the store and just smiled, bowed as we said  thank you and left. 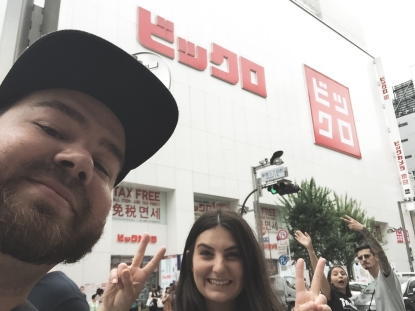 Tokyo is by far the safest place I’ve ever been to. I forgot things in stores / restaurants and people ran to give me back my stuff. Also an other interesting thing is that there a almost no cars in Tokyo. Everybody is walking, riding a bike or taking the subway.
The subway is an other amazing thing, it covers every possible places in Tokyo and has so many stations, it’s overwhelming at first. By the end of the trip we were starting to find our way around. 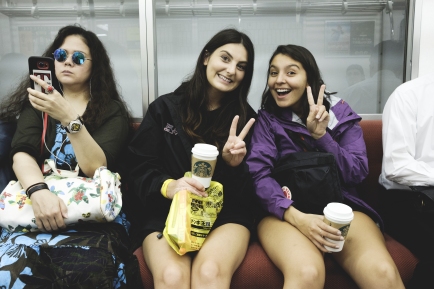 We visited the touristic attractions like the Tokyo tower, Skytree and Shibuya but also went to random places to walk around and shop. We also visited the Fujifilm Square in Roppongi which was awesome. The trip was unplanned but amazing. Lots of great memories and goodies brought back.
I will leave you guys on my favorite images from the trip. 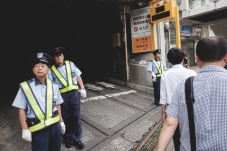 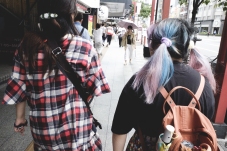